Special election for Ward 8 Councilmember is a “Civil War”

Posted by jmullerwashingtonsyndicate in Uncategorized on January 8, 2015

More than twenty potential candidates have gathered their nominating petitions and begun organizing for the April 28th Special-Election to fill the Ward 8 City Council seat left vacant by Marion Barry’s death on November 23rd. In order to qualify for the ballot candidates must secure 500 valid signatures by January 23rd.

The mayoral debate at Anacostia High School nearly got out of control. What will happen when candidates for the Ward 8 City Council position debate?

In recent weeks vitriol has been exchanged between candidates on social media platforms and between campaign staff and volunteers on neighborhood streets. Rev. Oliver “OJ” Johnson, a community activist in Ward 8 for more than four decades and a former campaign organizer and ground operative for Mayor Walter Washington and early Barry campaigns, says Marion Barry’s death has made, “Ward 8 a political battlefield. We are witnessing a Civil War, brother against brother, family against family.”

Some candidates, such as Sandra Seegars, Nate Bennett Fleming, Trayon White and Eugene Kinlow, are recognized across the ward while others, such as Greta Fuller, and Karlene Armstead, are more closely associated with their respective neighborhoods. While many aspirants currently serve as Advisory Neighborhood Commissioners or have held the office in recent memory, other potential candidates face the challenge of being largely unknown.

Sheila Bunn, a high-ranking member of Mayor Gray’s staff and daughter of recently deceased Congress Heights’ business owner James Bunn, announced her candidacy upon the swearing-in of Mayor Bowser. After much speculation within the media and community, Marion Barry’s son, Christopher, has picked up his nominating petitions making the continuance of a local political dynasty possible.

Factious political climate
Johnson says the opportunity to replace Barry has brought out nearly every possible community leader the ward has to offer, which has the potential to create long-term problems.

“You see a lot of support for candidates along geographic and demographic lines–young people, professionals, public housing residents, ex-offenders, established homeowners, single moms,” Angela Copeland, administrator, and sometimes referee, of the Great Ward Eight Facebook page where many candidates have posted in recent weeks, wrote in an email. “Each group saying their candidate is THE candidate. The choice candidate will have to cross those boundaries and represent the entire ward, take us into the future; free of the morass of ward in-fighting. It’s going to be a ‘show-up’ moment for Ward 8 in many ways.”

“When Marion was alive many of today’s candidates didn’t have the courage to challenge him. Therefore they were part of Barry’s campaign structure. That has all splintered now. This election could cause bad feelings among folks for years. Marion, whether or not he truly delivered results in the Ward, could maintain the peace among these different groups and their organizers. There wasn’t infighting when Marion was on the council because there wasn’t anything to fight over. Now we are seeing the lack of political infrastructure and sophistication in the Ward because for more than a decade there was very little organizing.”

In addition to Johnson’s analysis of the current special-election process, he says the short turnaround, with the four-year term coming up in 2016, means the factious political climate will likely endure.

“There is no time for these groups to coalesce because in less than two years they will be battling each other for the council seat. For those that qualify for the April ballot but lose they will try and keep their ground organization together. To run an effective campaign, a winning campaign, you have to have campaign workers, precinct captains, sign wavers and others. There are a lack of experienced workers available in the ward with so many candidates running, which means those with finances can import workers. Now that funding may help get you over the top and win, but once you’re in office you realize money doesn’t maintain support. Everyone who lost is going to be attacking the Councilmember because they’re calculating for 2016. It’s some madness that I’ve never seen before and I’ve damn near seen it all.”

Copeland offers a similar assessment, “It’s really early in the game and folk are posturing themselves and readying their squads. Some are out doing the work–getting petitions signed, shoring up their team—those are the serious candidates that will make it to the next step. Others are blowhards with a lot of talk of yesteryear associations, ad hominem attacks, and no platform. We’ll have a better idea of the playing field once the petitions are turned in and they clear the challenge period.

From the nearly two dozen potential candidates it is probable that a half-dozen will qualify with a likely field of Sandra Seegars, LaRuby May, Natalie Williams, Marion C. Barry, Sheila Bunn, Trayon White and possibly Nate Bennett Fleming. While it may be too much to hope that the tone will change, there is discontent building as the candidates personally attach each rather than advancing policy.

Posted by jmullerwashingtonsyndicate in Uncategorized on July 8, 2014 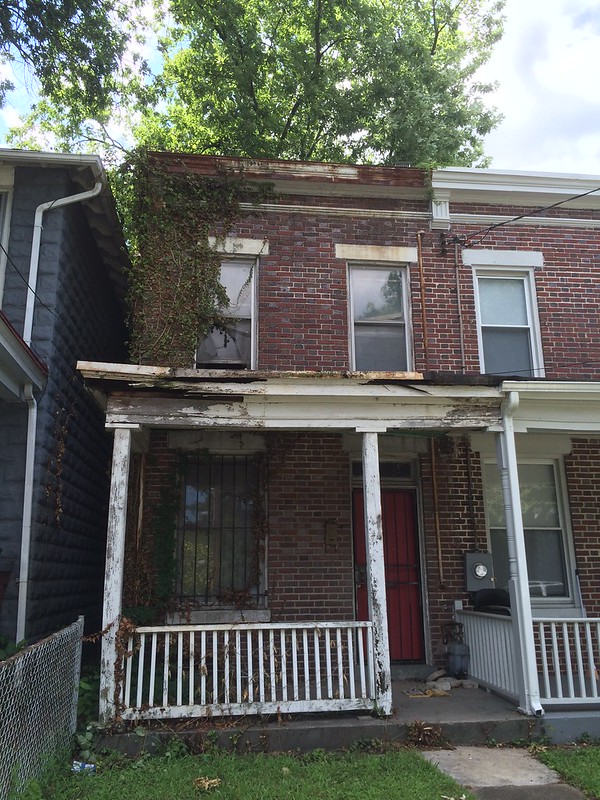 On the outside is may look like 2314 Shannon Place SE, a stroll down the street from the Anacostia Metro, is just another vacant property on the periphery environs of Old Anacostia. At the left corner, 2314 Shannon Place, of a four row-house development (2314, 2316, 2318 and 2320) ivy has begun its encroachment, a symbol of neglect and abandonment. The outside looks better than the inside. 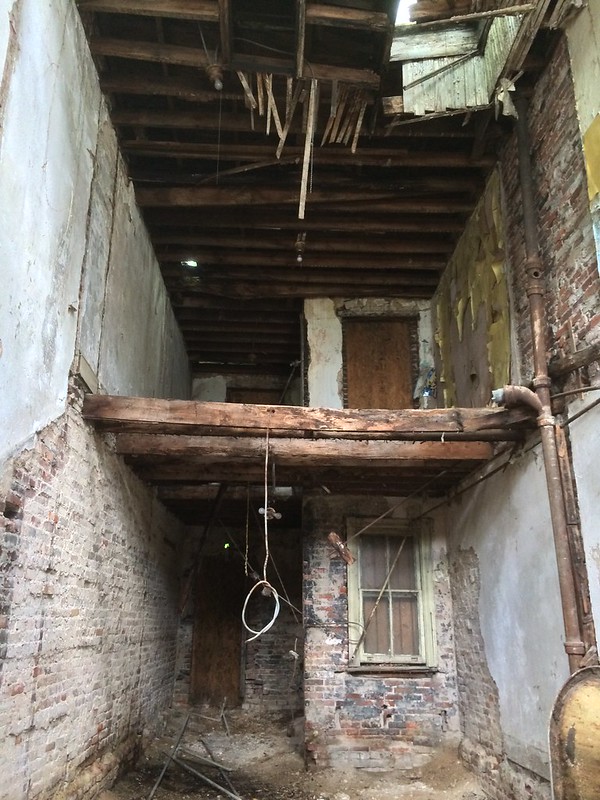 The front door opens up to a pit. Nothing much resembling interior decorating or the presence of walls are left. There are no interior walls. All that remains are four decaying floor boards between the intact brick shell. 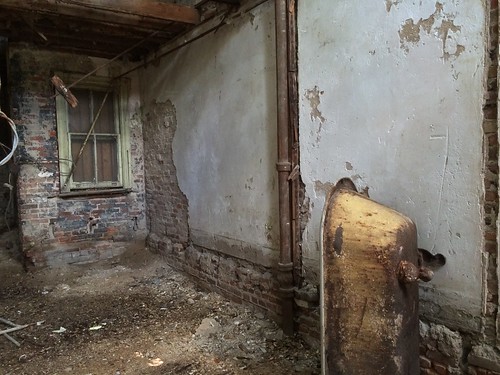 An upturned bathtub endures, most likely too heavy to remove and not worth its weight to anyone. 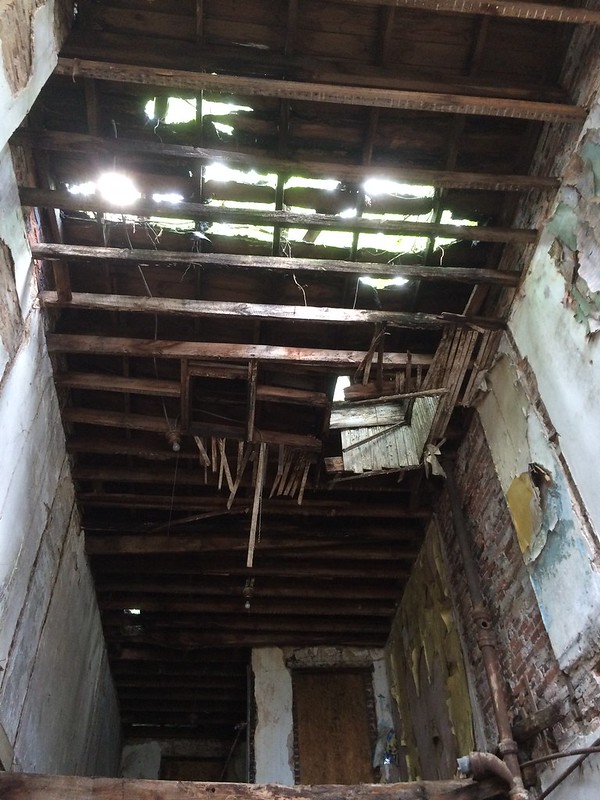 Looking up, sun beams in through large holes in the roof. Whenever it rains water streams through the home and onto the floor which has nearly turned to sand.

According to Brian Kraft’s Building Permit database the four properties were built in 1915 at an estimated cost of $1,500 each. The owner, architect and builder of the four row houses was William C. McGowan.

According to OTR’s Recorder of Deeds, on June 13, 2014 a deed between “Laura E. Johnson, surviving tenant by the entirety of Thomas J. Johnson, who died on November 11, 1980 by Emma O. Bakare her power of attorney which is to be recorded prior hereto, party of the first part, and Walter A. Arevalo, party of the second part.

Witnesseth, that in consideration of the sum of One Hundred Thirty Eight Thousand and 00/100 Dollars ($138,000), the parties of the first part do hereby grant unto the party of the second part, in fee simple, as sole owner, all the piece or parcel of land, together with the improvements, rights, privileges and appurtenances to the same belonging, situate in the District of Columbia.”

If the property has been vacant for nearly 35 years that would explain its condition. A strong-armed center fielder, with a serious crow-hop, could throw a baseball from the front of this home to the Anacostia Metro station.

A member of the Great Ward Eight Facebook page grew up next door to 2314 Shannon Place SE and recalls Mrs. Laura Johnson. The member shared that house was occupied until at least 1989. Laura Johnson was the wife of Thomas Johnson. I initially thought she may have been the daughter. In many of these cases it is very difficult to interpret property records without the assistance and information of long-time residents and good folks. Thank you for the kind help. – JM & WA-El